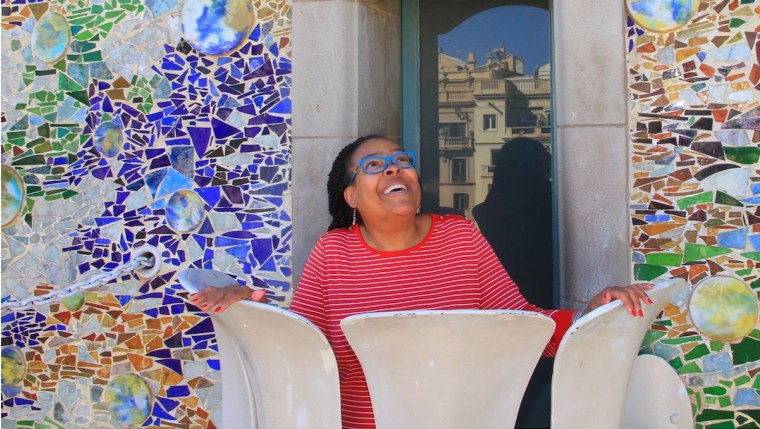 It takes some serious cred to be known as the Aviation Queen—and Benét J. Wilson has just that: This senior editor at The Points Guy (TPG), has covered the industry for more than 25 years. Her deep knowledge makes her Twitter feed a must-read, especially during Black History Month, when she’s sharing a fact each day about Blacks in aviation. At the same time, Wilson is helping to shape the future by coaching the next generation of journalists; she has around 200 mentees under her wing and regularly hosts webinars on topics like imposter syndrome, the importance of networking, and tools to do your job smarter and better.

TripActions sat down with Wilson to discuss her career, the importance of mentorship, and how the industry can work toward a more meaningful representation of Black voices.

What piqued your love of aviation?

When I was six years old, my father got assigned to a military base outside of London. This was in 1971 when air travel was still a luxury and you actually dressed up. And my sister and I did; we had on white gloves, little purses, hats. It was a big deal because most middle-class Americans didn't know anyone that had flown.

When I got on the plane, the flight attendant asked me if I wanted to go into the cockpit. I was a little geeky kid, even back then. It was a Boeing 747 and it was Pan Am—that’s how old I am. The captain was so kind. He was showing me everything, and I was just fascinated. I said, “One day I hope to be able to fly on this plane again.” He looked me dead in my eye and said, “No. I don't want you to fly on the plane. I want you to fly the plane.” And something in my little six-year-old heart clicked. That was the beginning of the love affair.

How has mentorship added value to your career?

My grandfather and my father were Air Force officers at a time when there weren't a lot of Black officers—or officers of any color. I grew up watching them mentor generations of Air Force commissioned and non-commissioned officers and saw how they changed people’s career trajectories because of their mentoring.

When I started my career, I had a lot of people who really helped me out. I think about my first boss; I made a huge mistake in a story and it was one of those journalism mistakes that should get you fired and end your career. But instead, I was suspended and he kept me on and told me that he knew I was going to learn from the mistake. He mentored me, and people I had met along the way in the industry have mentored me. I felt like it was my responsibility to give back, and that's what I've been doing. I don't even know how many mentees I have—if I were to make a guess, I would probably say around 200. Some like to call regularly, and some will call on occasion or when they need something.

What advice do you give to someone who is just getting started?

I tell people to be flexible because journalism has changed so much. I started my career on a typewriter. There was no Internet, no laptops. It's come a long, long way. So I tell people: Be flexible and always be learning. There are a lot of people my age now that are no longer in journalism because they thought the Internet was a fad; they didn't want to take the classes and do the things to keep up their skills. You can't stay static in journalism. You have to change with it if it's a career you want to stay in.

What challenges have you faced as a Black woman in this industry?

One bit of advice my father gave me early on was to never let my gender or my race be a deterrent to climbing the ladder. I developed a thick skin early on because aviation is a pretty white, male-dominated industry. I kind of stood out; I couldn't hide even if I wanted to. I just kind of embraced it. There are people who always underestimated me or thought that I was the secretary instead of an actual journalist. I had to bust through those myths, when people didn't know how much I knew about this industry, just to get their respect. That continues to this day. I try to give people patience and grace, but I won't be underestimated.

I won't lie. I won't say it's been perfect. I’ve seen fits and starts, but I think after the George Floyd murder in late May of 2020, finally, a light bulb really did go on. Social media has helped with that. Newsrooms were being called out. Blatantly. People would post a picture of their newsroom, and others would pile on: “Where's your diversity? Where are the women? Where are Blacks, Hispanics, Asians?” I think that the media has really taken that seriously. But I still think there is a problem. I still hear people say, “We can't find journalists of blank.” We are out here. You just need to look for us.

Also, it's not enough just to hire people. You need to retain them. You need to have a newsroom that makes people—all people—feel comfortable and not have to deal with microaggressions or stereotypes. It's exhausting. It can be like a second job for some journalists. But I'm seeing a little light at the end of the tunnel, and I'm generally an optimistic person. So I'm going to hope that this continues.

How can the industry work toward a more meaningful representation of Black voices?

The National Association of Black Journalists (NABJ) has been around since 1977. If you're in a medium-to-large city, you can bet there's either a professional chapter, a student chapter, or both. Go to the national convention. Get a booth and recruit there. Attend sessions. Network with people. We invite everyone to NABJ.

After George Floyd was murdered, I did this in my own newsroom, I am really proud of the work that TPG has done. We are not perfect, but long after people took down their black social media squares in 2020, we were still doing the work. Our newsroom has diversified greatly. We work with all of the journalism organizations that I've named. We have put money on the table. We participate in events when we're asked. I have five paid internships available, and I have been really, really pushing to get people to apply.

What about diversifying the tourism industry?

After the George Floyd murder happened, the Black Travel Alliance was created in June. It's a wonderful organization. TPG gave them our Making a Difference Award late last year. It's a bunch of people in the travel space who are influencers, writers, tour guides—anyone, any touchpoint in the industry. What BTA did was a campaign called #PullUpForTravel. They challenged tourism industries, convention and visitors bureaus, and travel brands—including airlines and publications— to commit to diversifying the travel industry. TPG was one of the first, but there were other brands out there that stood up; they started sharing their numbers and committed to being more diverse.

I remember when I was interviewing for TPG and I noticed there wasn't a lot of travel coverage for minorities. I told them a study had come out that Black people alone spend $130 billion a year in travel. We like to travel! We spend money on travel. Raising that awareness is important. At TPG, we've hired more diverse freelancers to talk about their experiences and what they're doing. We have an independent panel that meets once a month; they look at our stories and tell us what we're doing right and what we're doing wrong, like having photos of people of color instead of Caucasian people all the time. It’s little things like that that can really raise the bar and help people of color feel like they are in fact being listened to and covered in the travel and tourism industry.

This interview has been edited for length and clarity.