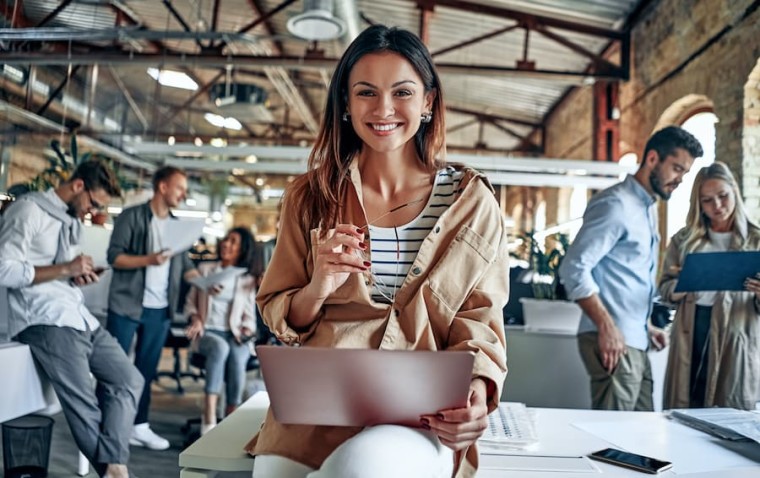 Women in Sales & CS Create Space for Collaboration and Camaraderie

Diversity, equality and inclusion is a priority at TripActions. Read all of the content highlighting the TripActions Employee Resource Groups and programs.

Women still make up the minority of salespeople in the tech industry today—a statistic that TripActions actively works to amend within its own teams. Women represent every level of leadership throughout the TripActions sales and customer success (CS) departments in part because its employees actively look to support, encourage, and propel one another towards success, regardless of gender, nationality, or background.

Young women joining TripActions in a sales or CS role today need look no further than their own office for a role model: For example, Hillary Unis, Director of Corporate Sales East, launched and scaled the Austin office from 8 people to more than 100 in the past year. And Lizzie Rouleau, Senior Director of Enterprise Sales and Account Management, has been an integral member of the sales team since the company had just 15 employees. They’re just two of dozens of women breaking down the traditional bias in sales and customer success positions.

Several women at TripActions recognized the support and encouragement that helped bolster their careers and created the Women in Sales and CS Employee Resource Group (ERG). TripActions ERGs are voluntary employee-led groups that support and unite diverse communities to cultivate a greater sense of awareness and belonging throughout the company. In this ERG, women in these departments can not only be seen and heard—they can also collaborate, educate, and inspire one another to continue making a positive impact in the workplace and community.

“Over the past two years, the TripActions WIS&CS ERG has taught me so much through their mentorship groups,” says ERG co-lead and Enterprise Account Manager Anna Romeka. We have an executive speaker series featuring strong, admirable female leaders, as well as monthly coffee talks. Seeing the group cheer one another on, share interesting articles, books, podcasts, and challenge ourselves to remove biases is incredibly impactful and motivating,” she says.

“Everyone deserves a safe space to be vulnerable, especially with the speed and demand of our amazing business. Having a safe space to connect, mentor, and learn from one another is immeasurable in the greater impact it brings to folks’ lives, happiness, career, and the company. The WIS&CS ERG is specifically important to help empower our members to dream big and reach their goals.”

Every ERG has two global co-leads who help lead the group, and who form part of the Belong: DEI Council, which helps further the company’s DEI strategy, foster collaboration, and support company-wide efforts to build awareness and increase visibility. Women in Sales and CS co-leads Anna and Hillary help run the group, as well as organize its activities and outings.

If you want to hear about the impact of the Women in Sales and CS ERG, it’s best to listen to the members:

“I’m a big believer in the equality of opportunity. Giving women a space to discuss, collaborate, and support one another—and to invite others into this space—ultimately allows women to continue to grow within the workplace, creating equal opportunities across the board.

As part of the sales team, it’s so important to show metrics and ROI, so let’s do that here as well: A McKinsey study showed that better gender representation in the workforce drives 15% better profits and performance. That’s pretty powerful on its own.

The community is a great way to not only build wonderful personal relationships across the world but to really learn from some fantastic female leaders inside the business. What’s been fantastic to watch is how much everyone is rooting for others: If there is a shoutout, promotion, or any achievement, it really gets called out and celebrated within the community.

In a company that is as agile, dynamic, and fast-growing as TripActions, it’s crucial to create collaborative, safe, energizing spaces such as ERGs.”

“The WIS&CS ERG provides access to people in other spaces at the company—both geographic spaces and across different organizations and roles—that one wouldn't organically get without ERGs. This was especially important with remote work!

I have made friends, mentors, and, ultimately, a support system. Our women get recruited all the time by other companies, and this group creates another bond with TripActions. I would never want to leave my ladies! The best part of the community is the love and support, shout-outs, and the hype around one anothers’ work and accomplishments. It feels like I have true friends and fans.”

“Most of my time spent at TripActions has been during the pandemic, since I started in December 2019. The Zoom culture was necessary but, ultimately, misrepresentation of our company. When you are on seven meetings a day and only have one or two women per call, it often feels isolating. Being a part of the Women in Sales & CS ERG was a good reminder that we are a strong, powerful force here, especially when it comes to supporting each other.

Women are wired differently than our male and other gender counterparts. It's something we should be incredibly proud of; however, women are often made to feel that being viewed as emotional, reactive, or outspoken is a negative thing that will impede their careers, so they shy away from showing those traits to their colleagues. It is important that we build a culture where those attributes are celebrated with just as many emoji reactions as big TBUM closed-won wins, if not more. And the best way to accomplish that is to have a safe space to discuss, collaborate, and support one another.”

Learn more about diversity, equality, and inclusion at TripActions.