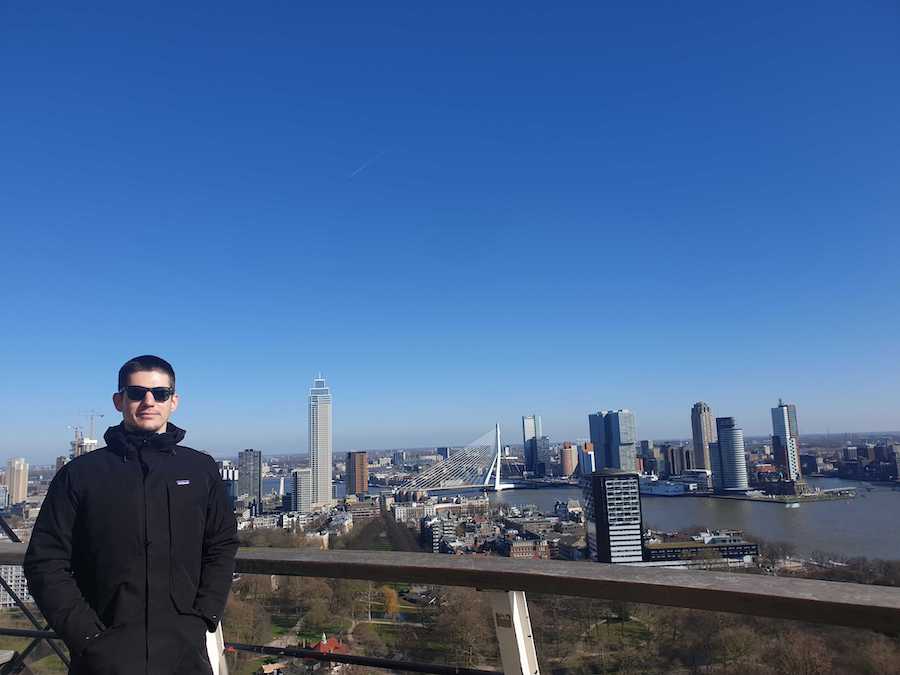 Talent Spotlight: Why Ante Buterin Loves the Culture of the TripActions Engineering Team

Welcome to The Talent Spotlight Series, where we chat with our global team members. The participants were selected by their peers for their incredible work and team spirit, and how they embody TripActions values.

Ante Buterin is a back-end software engineer in the Amsterdam office who focuses on the TripActions booking and support experience around train inventory. While the rail product has been an important component of TripActions since the company’s beginning, Ante’s team has been aggressively adding more inventory channels so users can access more fares across more carriers directly in the booking experience.

Ante became interested in engineering in high school when he realized how easily he could make a simple game like tic-tac-toe or Minesweeper during a programming class.

“It was such a fun experience, because you see the results of what you built so quickly. It got me interested in computer science from an early age, which is why I decided to go into a mathematical background. I wanted to build the foundation and then expand into actual computer science,” he says.

Originally from the Croatian city of Zadar, Ante finished a Master's in Computer Science and Mathematics at the University of Zagreb while also working on his desktop and mobile software development skills. It was his experience as a Facebook intern during university that really gave him the skills to continue building his career.

“The internship was rigorous and I learned from a really great manager how to actually be a good software engineer, follow good engineering practices, and apply them,” he says.

Shortly after college, Ante moved to Amsterdam and was excited by the culture of the smaller city; it was there that he also learned about TripActions.

“I really liked the recruitment process because, unlike the other recruiters that I had a chance to communicate with, I felt that I could approach the TripActions recruiter directly and ask to go through the process as fast as possible. I really liked being able to talk to so many team members and get an idea of the role in a short amount of time,” says Ante.

“It was a no-brainer. I accepted the offer.”

Aligned on Creativity, Diversity, and Growth

The ability to communicate clearly and directly was just the beginning of the culture alignment that Ante found at TripActions.

“There were three major points that I wanted to see in a company's culture. The first was an objective and empirical approach to problem-solving. I like companies where people can pause and say, ‘Let's first review this problem and look at the pros and cons of the possible solutions,’ instead of just jumping in and taking the first obvious solution that comes into mind.

The second one was diversity. If you have two groups of people—one is homogenous with people coming from the same cultural background, and the other group is more heterogeneous people coming from different backgrounds, races, and universities—and you give them the same project, I think that the heterogenous group will always provide a better solution, because you will have different people with different opinions and ideas.

The third point was from a social aspect. I could see that company really cares about socialization between its team members. The company invests in bringing people together from all over the globe to meet people in the other offices—especially with TRAVERSE. Those were the three key points that made me choose TripActions in terms of company culture.”

Ante was also pleased to see how TripActions truly embodied meritocracy. He saw how differently the company approaches age compared to other companies, where they would judge or hold back certain employees based on age.

With the engineering team specifically, Ante has enjoyed the freedom that’s given to each individual to do their best work. He described how his manager first came to him and asked about how he preferred to work and how they work together, so that Ante could bring his best self to the job.

“If there is anyone who likes their manager to give them freedom so they can be more creative at the work they do, I would say TripActions is a perfect place to do it.”

Ante finds that TripActions provides innumerable opportunities for growth and to take on more responsibility in one’s career.

“In terms of career growth, I don’t think that it’s all up to you; it's up to people to enable you to grow. If your manager gives you bigger tasks because he believes in you, then that’s an opportunity you can snatch to grow and learn from.”