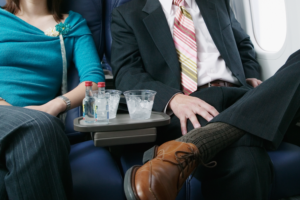 The Effects of Drinking Alcohol in the Sky

Drinking on airplanes has been around, well basically since the first commercial airline flight. Alcohol was initially on board to entire travelers in a time where flying was a luxurious event costing exorbitant amounts of money. That was back in the 50s and 60s although it seems drinking mid flight is still a popular activity.

At the end of 2016, United introduced a new premium cabin called Polaris which includes more luxurious amenities. One of these special features is a wine flight where the passenger can try three wines from their selection. This has become so popular for Polaris travelers that United announced they are experiencing a shortage as it is being consumed 300% more than they had forecasted.

Around the same time United launched Polaris, one Southwest flight had something to celebrate. The passengers drank the entire aircraft dry of the alcohol onboard. Travelers were headed to a football game in Kansas City on a three hour flight when the pilot congratulated everyone onboard over the intercom speaker.

While it seems more and more travelers are opting for a sip or two inflight, there are some side effects travelers should note. The cabin of an airplane has a much lower barometric pressure rate than most places on the earth, similar to high altitudes such as the mountains around 1.1 to 1.4 miles up. This decrease in pressure reduces our body’s ability to absorb oxygen and can create light-headedness. We feel this similar experience when going up an elevator too fast, a speeding car, or roller coaster. The actual feeling is called hypoxia and can happen more frequently on a flight when alcohol is being consumed.

In addition to this hypoxia feeling when drinking at the high altitude, you will start to notice the feeling of alcohol sooner than you would on the ground. When drinking the same amount you would on the ground, you can potentially seem more drunk when drinking the same amount in the air due to the lower level of oxygen in your blood. Another key factor is the cabin’s dry air that’s circulating throughout the vents making you more dehydrated. You can read more about alcohol and it’s affects, specifically for pilots from the Federal Aviation Administration’s pilot handbook.

While drinking in the sky can can cause some undesired side affects, everyone deserves a drink or two whether you’re returning from a stressful business trip or heading to a company event. Here are a few tips to help you avoid these side effects:

Will scientists invent a cure for the side effects of drinking at high altitudes? Will airlines broaden their range of alcohol offerings? We’ll have to stay tuned.

To keep up with our blog for more news about business travel, subscribe to our blog here.