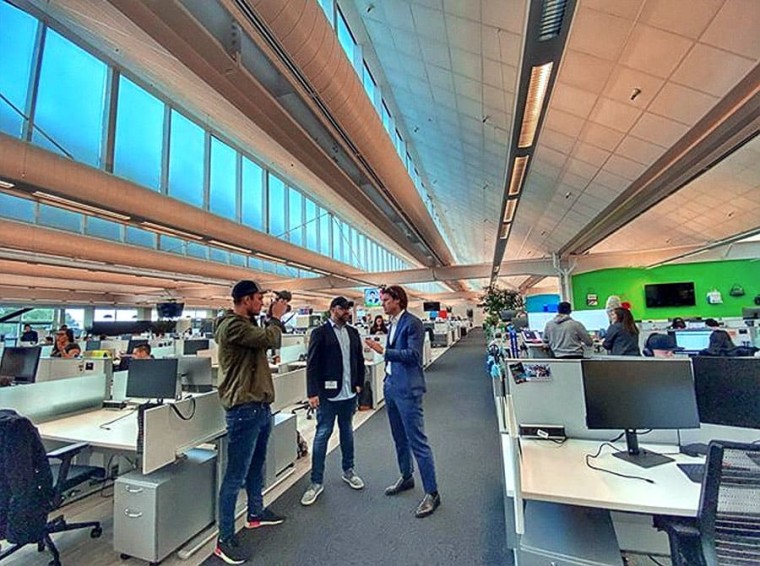 TripActions HQ had a special visitor last week. Hillel Fuld describes himself as a “TripActions fan boy,” but he is so much more.

Hillel is an American-Israeli tech blogger, business advisor, and speaker with insights into some of the most exciting tech companies and investment firms in Silicon Valley. He arrived at our HQ on his second day in Palo Alto with friend and TripActions investor Dovi Frances of Group 11 - who also happens to be an Israeli celebrity as one of the Sharks on Hakrishim -- the Israeli version of Shark Tank. Hillel spent time getting to know our teams and hearing from VP of Product Anique Drumright.

While we don’t want to spoil the surprise of Hillel’s on-camera interview with Anique that will be published soon, they chatted about TripActions Co-founders Ariel Cohen and Ilan Twig’s inspiration behind TripActions as road warriors themselves, and how they took a different approach than the legacy players that existed in the market.

“It’s a unique differentiator for TripActions in the marketplace that we are focused on the user, all of them, all of the time,” noted Anique. “By solving the pain points of the traveler, we’ve created a platform they love and actually use, which solves all of the pain points of the enterprise. Namely, organizations get the spend visibility, control, data and insights they need to optimize their travel programs and policies, save money, and take care of travelers.”

Hillel then sat down with TripActions VP of Corporate Marketing, Brand and Communications Greg Perotto for a live Twitter chat about the difference between the tech scenes in Silicon Valley and Tel Aviv, how Hillel travels for work, and what’s at the heart of the world’s most transformational companies.

The Silicon Valley of Israel

“I’ve never seen anything like the tech scene in Tel Aviv. It’s quite a phenomenon and I’ve been lucky to work with entrepreneurs there. I wear a couple of different hats,” Hillel said when asked about how Tel Aviv and Palo Alto stack up. There are a lot of similarities such as “the energy. There’s something in the air that can’t be compared to anywhere else.” There are also differences, said Hillel, calling Palo Alto chill in comparison with the city life in Tel Aviv.

He had a surprising answer to Greg’s next question about his impressions of TripActions after a day spent at HQ.

“When you think of the world of travel, you usually think of travel as a utility. People don’t have loyalty and they travel to get to their destination. TripActions is changing that. TripActions is saying, ‘Let me give you the best experience to get there.’ Good technology is transparent. Good experiences are frictionless. That’s TripActions.”

Hillel compared how TripActions is changing the corporate travel industry to how Steve Jobs changed the smartphone and the exact moment when Jobs revealed the iPhone and explained why it didn’t need a keyboard.

Holy actual heck.
This. Just. Happened.
Such a fanboy of @TripActions! pic.twitter.com/G1e03d2tGD

“It’s all about the experience. If you’re making the corporate experience a good one, and you [TripActions] are, then you win. I can’t think of a company that’s growing faster… Part of the success of this company is the culture,” Fuld said as the camera pans to the lunch hour where colleagues catch up. “Walking into this place was epic.”

The Human Piece in Travel & Business

Greg and Hillel then chatted about their favorite travel hacks, which go beyond what to pack.

Greg noted that after years of travel and achieving lifetime status with multiple loyalty programs, he tries to never check a bag: “It completely limits your standby options in the event of a travel delay or cancellation.”

“My travel hack is to talk to the staff, make friends, and be human. Which is the core value of TripActions. I don’t mean that in a cynical way: Be nice to get something. Be nice because it is right,” he said.

Relationships were a major topic throughout the conversation. Greg spoke about how TripActions is about bringing a human touch technology so people can focus on the relationships rather than the details of the travel itself: “It’s about taking care of those details so users can focus on what they need to accomplish when they get there, rather than the process of getting there,” Greg noted. The best brands are building community and loyalty by being true to their customers.